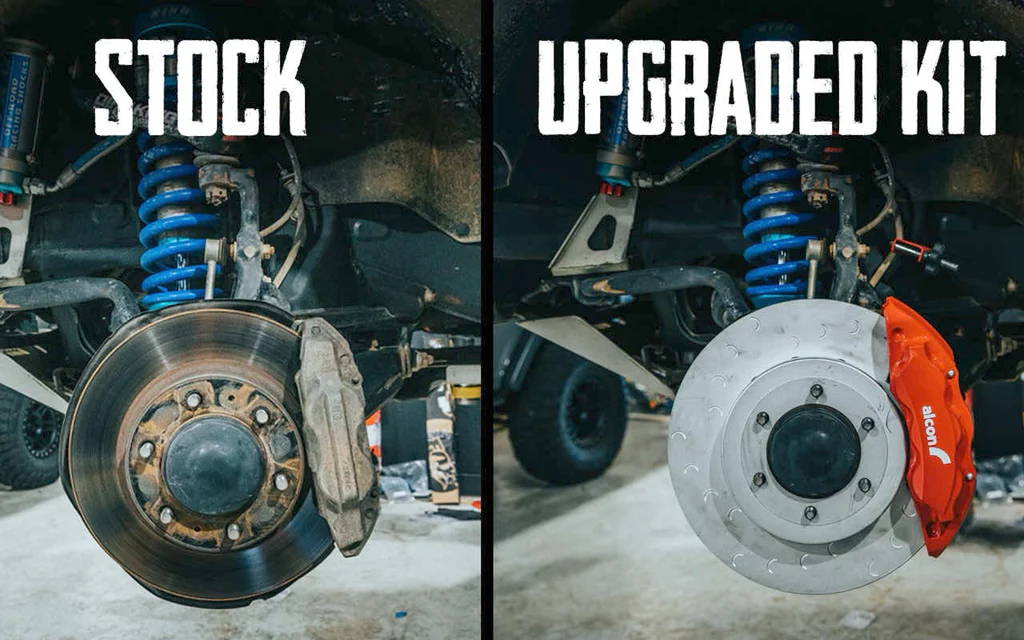 Is upgrading your Tacoma brakes worth it?

The stock brakes at the front of your Toyota Tacoma leave something to be desired, especially once you start adding heavy upgrades to your truck, modifying your suspension, and throwing on bigger tires—not to mention those of you who use your Tacoma to tow. They are simply not designed to accommodate such significant changes, causing their performance to suffer in a very noticeable way.

There are a handful of aftermarket options available to upgrade your factory brakes and improve performance in the face of modifications and hardcore use. We recently tested the Alcon front brake upgrade kit for third-generation Toyota Tacomas and compared it to the stock brakes. Read on to see what we learned.

To test the brakes, we set up a course. The goal was to begin at the starting line, reach 60mph, then hit the brakes without locking up the tires. We would then measure the precise distance it took the truck to come to a complete stop from 60mph.

The Tacoma used in the test weighed in at around 5,500 lbs, placing it approximately 1,000 lbs over a stock Tacoma. 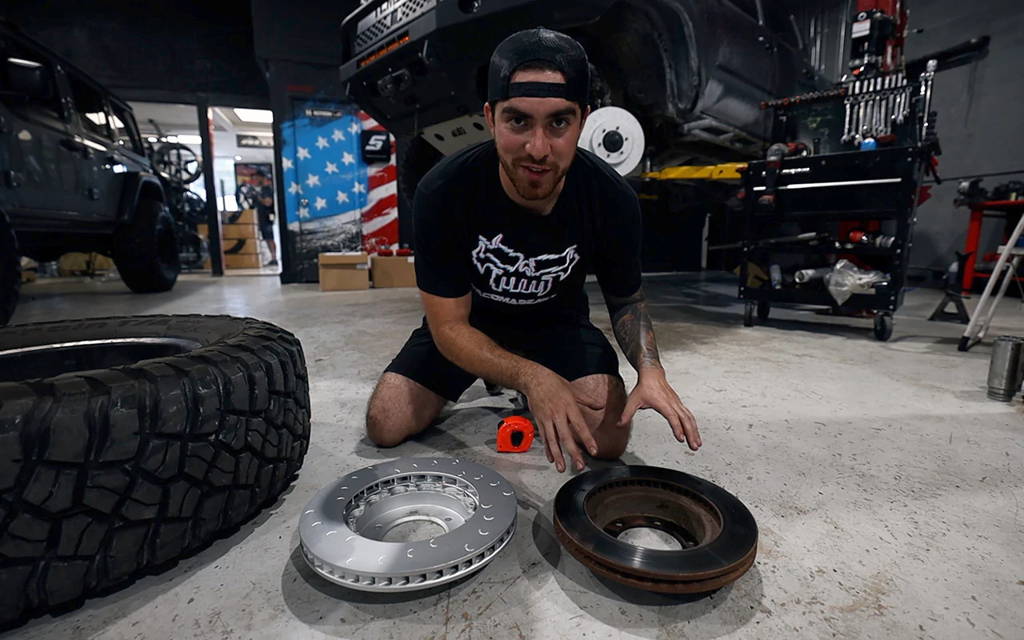 On the first brake test, the factory brakes stopped the Tacoma in 171 feet. To get a more comprehensive idea of the brake performance, we decided to perform the test a total of five times, then average all of the stopping distances.

However, disaster struck after run number three, as the rear of the Tacoma started leaking brake fluid. We ran the truck down to a shop to discover we had blown out one of the brake boots. The failure most likely occurred due to significant wear and tear from the abuse we have put the truck through, as the components were pretty rusty. That, combined with the pressure of applying the brakes heavily, most likely caused the seal to break.

With the problem with the rear brakes corrected, we completed the fourth and fifth runs of the factory brake test. The average stopping distance of the five tests was 174.8 feet.

Next, we wanted to test the brake fade of the stock Toyota Tacoma brakes. This occurs when brake pads and rotors stop creating enough friction to bring the vehicle to a complete stop. As brakes become hotter from consistent use, this effect becomes more pronounced.

To test brake fade, we accelerated to 40mph before slowing to a stop. We repeated this until brake fade was achieved. When it was all said and done, it took nine runs for brake fade to occur. 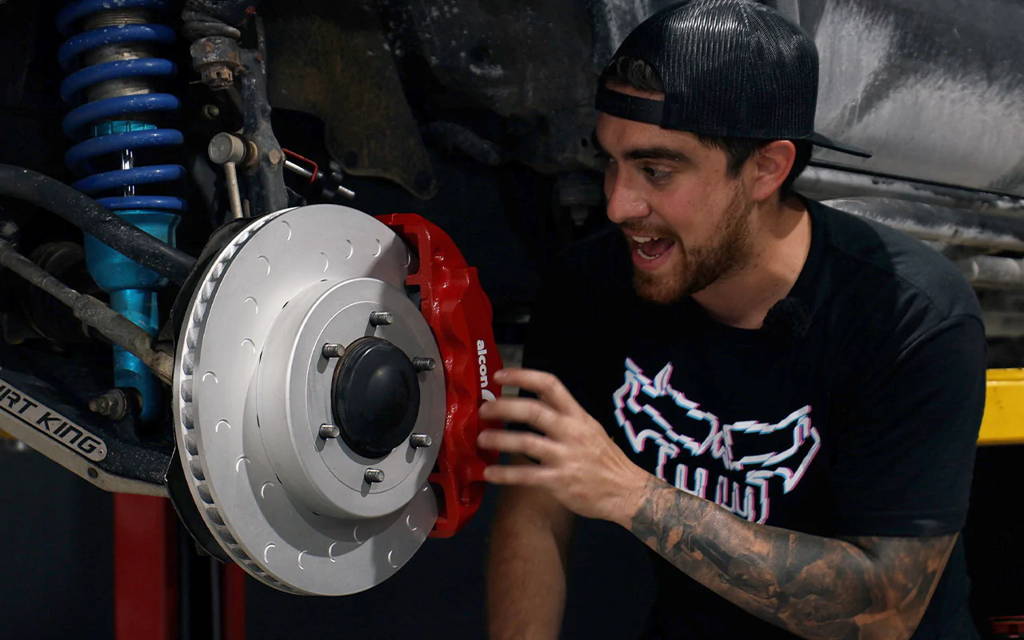 A visual comparison of the components quickly shows that the Alcon brakes are significantly larger and provide a much greater braking surface. Because they are so big, however, a bit of modification to the dust cover is required to make the rotors and calipers fit properly. It is also important to note that 17” wheels barely clear the upgraded brakes.

Once the necessary changes were made and the Alcon kit was installed, it was time to test the performance of the new brakes. 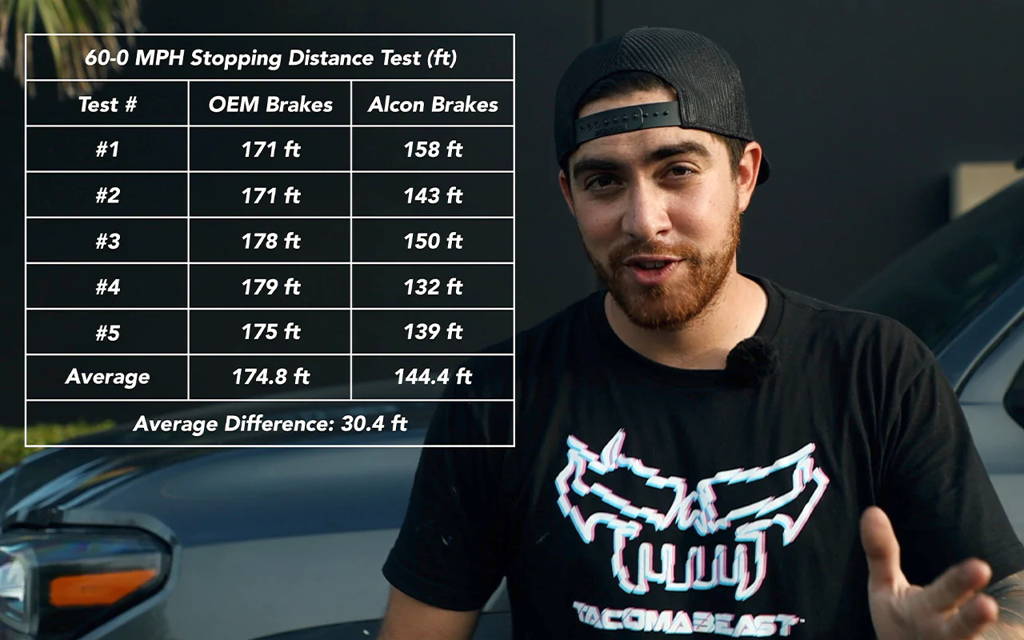 Once all five runs were completed with the new Alcon brake kit, the average stopping distance from 60mph was 144.4 feet, a massive improvement of 30.4 feet over the stock Toyota Tacoma brakes. Not only is this impressive from a numerical perspective, but it could also be the difference between safety and an accident in the real world. That makes this Tacoma brake upgrade worth it in our opinion.

When it came to brake fade, the Alcon Tacoma kit once again outperformed the factory brakes, taking a total of 25 runs for us to give up on finding the brake fade limit of these aftermarket brakes. In other words, it would take a lot for brake fade to be noticeable with this kit.

To see the Toyota Tacoma brake test in action and a more thorough breakdown of the data we captured, be sure to check out the video on our YouTube channel. If you are in the market for a Tacoma brake upgrade, the Alcon kit is a fantastic option. You can find it, along with a myriad of other Tacoma modifications and accessories, on our website.

We hope this information was informative and helpful. If you are modifying your Toyota Tacoma, feel free to contact us with any questions. We are happy to assist you in building the best truck for your intended use and help realize the dream you have for your Tacoma.

Let us know what you think and leave a comment below! 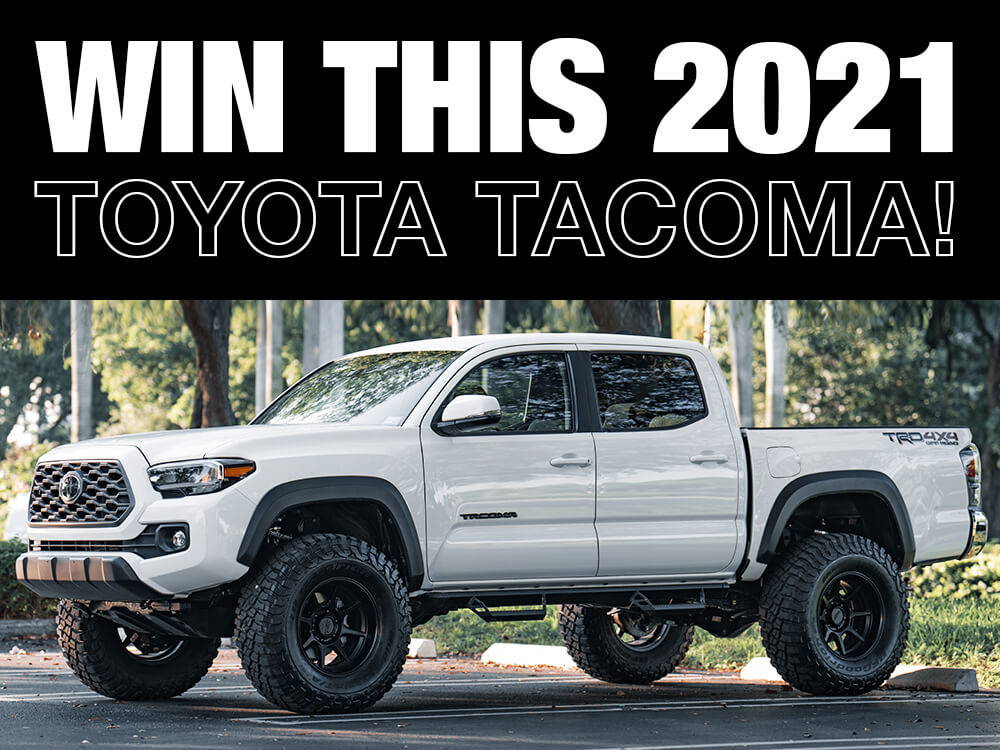 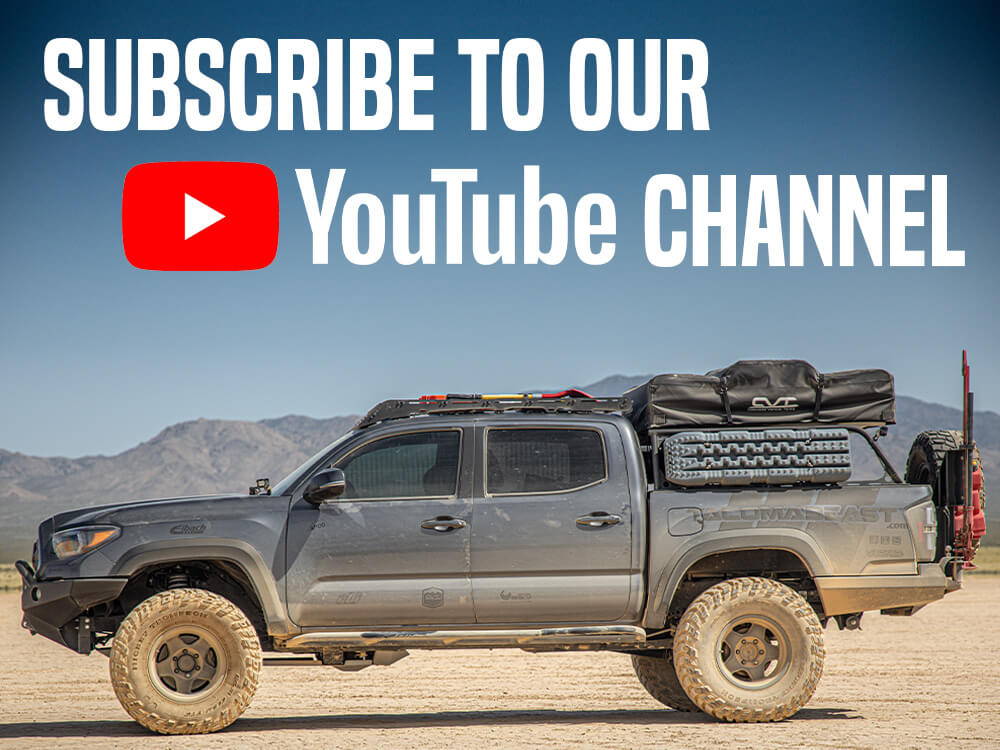